Amsterdam, The Netherlands (IBC — Stand 1.D11), September 07, 2012 — F&F Productions, a premiere mobile production company based in Clearwater, Fla., will be expanding the capabilities of its fleet of high-definition (HD) outside broadcast (OB) trucks with the additional purchase of four new Kayenne™ Video Production Center switchers, which will be upgraded to—or installed as—the new Grass Valley 3G-ready Kayenne Video Production Center with the new K-Frame available in Q4. The first of the new Kayenne switchers has already been installed for the NFL football season in the US. The remaining three switchers are scheduled for a staggered installation between December and January. Prior to this order, F&F Productions already had one Kayenne switcher installed.

Kayenne is field upgradeable, giving customers the ability to add features when the need arises. This helps to control capital equipment costs by not having to purchase features that are currently unneeded, while secure in the knowledge that those features can be easily added at a later time—directly linking CAPEX and OPEX to a customer’s service offerings and needs.

“We’re always looking for ways to improve our services and acquire live production equipment that will be reliable and perform to a high standard,” said George Orgera, President and CEO of F&F Productions. “We have been a long time user of Grass Valley production switchers and other equipment and really like the idea of the new Kayenne platform, which allows us to upgrade and add new features in our shop. This saves us considerable time and money—it’s a great idea.”

Kayenne with K-Frame will be available in two frame sizes (6 and 13 RU) that support more I/O configurations, M/E buses, integrated I/O scalars, integrated frame store, flexible software-based DPMs, and resizers for greater processing power per M/E and per system. The new Kayenne also offers lower power consumption, as much as 50 percent lower than competing products, which brings significant savings to any production operation.

“F&F Productions is a leader in its field and continues to impress anyone who’s seen their trucks and teams in action,” said Graham Sharp, Chief Marketing Officer for Grass Valley. “The new concept of choice found within the Kayenne product line is a game-changer for how outside broadcast and studio production companies manage their capital expenditure and operations budgets—buy what you need now and get what you need later.” 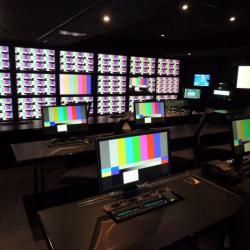 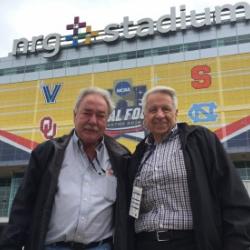