“As our business continues to grow, we rely on the latest HDTV cameras from Ikegami for the flexibility to be able to produce content in 720p, 1080i, or whatever format our clients request,” comments George Orgera, President and CEO of F&F Productions, one of the oldest privately held mobile production facilities providers in the United States. “With the Ikegami HDK-79EC and its CMOS technology, we have that flexibility and are native in all of these formats. The Ikegami HDK-79EC is the best available. Its CMOS imaging technology not only delivers sharp, multi-format HD, it’s also lighter-weight and consumes less power.”

“In this day and age, a lot of stadiums – especially at colleges-are still triax,” Orgera notes. “We have Ikegami’s triax adapters and fiber adapters for the cameras, so we can go either way. Ikegami enables us to go a lot farther on triax than any other manufacturer. With Ikegami, you can’t tell the difference between the two. I have no doubt that Ikegami has the best triax system.”

In addition to its operational flexibility, multi-format HD performance, and superior image quality, Orgera also noted the durability of Ikegami’s equipment at F&F Productions’ many locations. “We were in Vancouver for the Winter Games, and these cameras worked beautifully in the cold with no problems,” he says. “We also travel throughout the South, where summer temperatures can be brutal, but our Ikegami HDK-79EC’s continue to work beautifully.”

Having debuted its GTX-15 mobile HDTV production truck two years ago at the U.S. Open, F&F Productions is set to make history yet again when its new GTX-16 truck rolls up to this year’s tennis championship to provide production services for CBS. Incorporating the latest and greatest in HDTV production technologies, F&F’s new GTX-16 offers nearly 7 feet in headroom and a double blow-out production area for maximum comfort and convenience of network technical and production personnel.

“We switched to Ikegami cameras a long time ago,” Orgera says. “Right out of the box the Ikegami cameras work and they work like that forever. The Ikegami HDK-79EC CMOS camera is the sharpest and best there is. Their support is by far the best in the industry.” 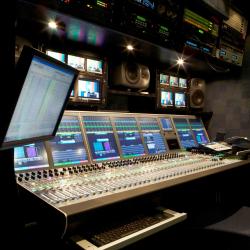